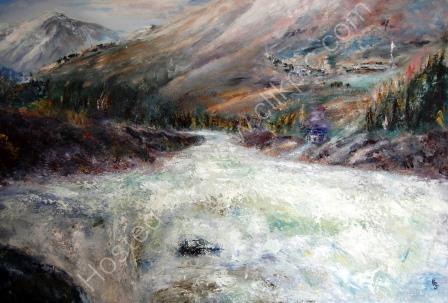 I was delighted to have been asked to exhibit three paintings at last year's Mountain Arts Festival at Rheged in Cumbria for Community Action Nepal. 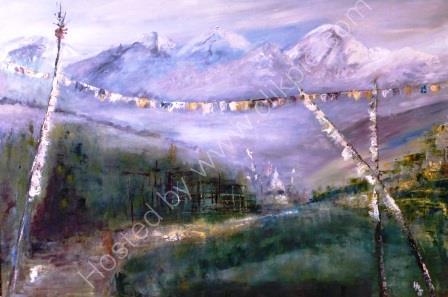 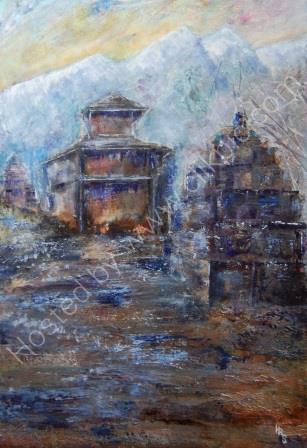 From 1981- 83 I worked in Nepal as a volunteer with my (now) husband David. We spent considerable time in remote districts on sanitation schemes.
I kept a written record of this time in the form of a book as well as photographs and sketches which I used as source material for these paintings.

The three paintings are of reminiscences of a day’s walk through different climatic regions in the Lower Langtang Valley (after leaving Syabru and before Langtang village and Gompa). They are not completely accurate due to having had very few photographs and using my book to trigger memories of further detail.

I used the themes of the elemental forces Water, Earth and Air as they are incorporated in Buddhist prayer cycles. Buddhism is the predominant religion in that part of Nepal.

the elemental force of the Trisuli River ,the tributaries of which are used to turn prayer wheels in water throughout these hills and valleys

MEDIUM : OIL ON BOARD

MEDIUM: MIXED MEDIA ON BOARD

paths surrounded by prayer flags, which send prayers into the wind and up to the hills and into the clouds

MEDIUM : OIL ON BOARD

In the Gallery section of Mountain Arts Festival I have included my original photographs of Langtang.
Next
Previous